Skip to content
98KUPD Presents:
HELLYEAH - A CELEBRATION OF LIFE
Ages 13 and Up 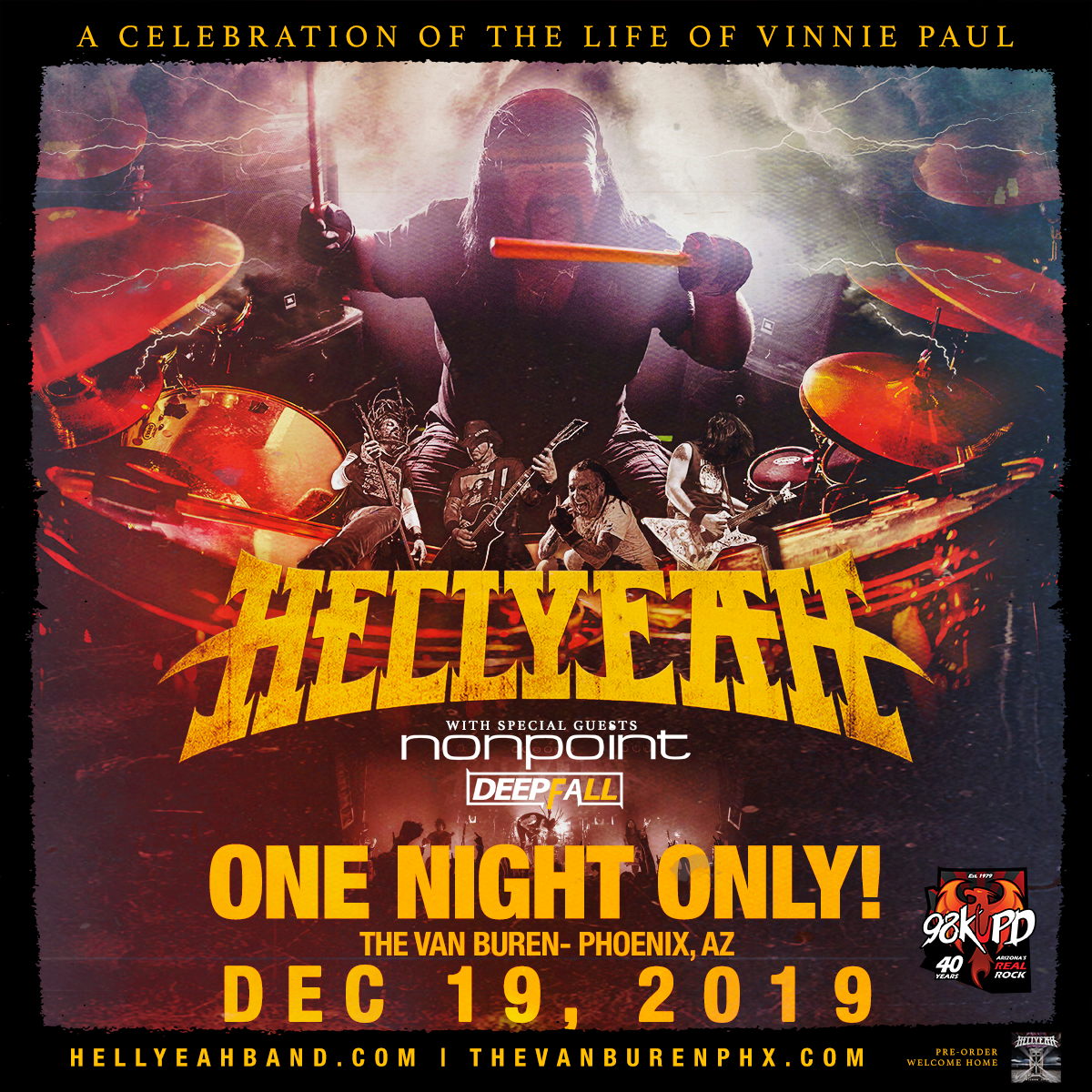 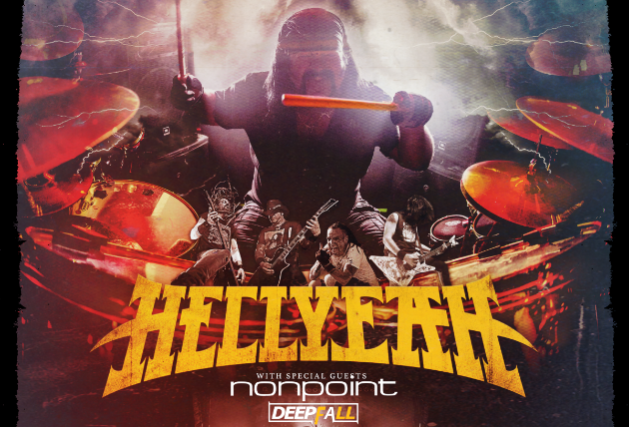 HELLYEAH: The Story So Far…
The terms “super-group” and “short-lived” are invariably synonymous. Here’s the all-too-familiar tale: talented individuals from different bands join forces to a huge fanfare of hype and all is well. But then, a mere album/tour cycle or two later, the so-called “super-group” implodes and disappears. History has proven this irrefutable truth time and ­time again…

Thankfully, every rule has an exception, and HELLYEAH is a truly remarkable one – to the tune of
12 years, six albums, tireless touring, and a genuine brotherhood that’s as palpable off-stage as it is on. Unfortunately, as we are all acutely aware, the band’s story took a tragic twist on June 22, 2018, when world-renowned drummer Vinnie Paul left this mortal coil to be reunited with his beloved brother, Dimebag Darrell. Dauntless, the heartbroken HELLYEAH bravely soldiered on to complete the album Vinnie had already recorded his drum parts for – the outfit’s sixth offering, the brand new Welcome Home.  “The world deserves to hear Vinnie’s last piece of work,” lead guitarist Christian Brady states. “He was so proud of it. There was definitely a huge sense of responsibility to honor his legacy.”

HELLYEAH  is the brainchild of Mudvayne frontman Chad Gray and Nothingface founder Tom Maxwell. It became a reality in 2006, when the pair successfully convinced Vinnie Paul, the legendary drummer of Pantera and Damageplan, to pick up his sticks again after the tragic loss of his equally legendary brother. The first few times Chad and Tom asked Vinnie to join HELLYEAH, his answer was no. Years later, says Chad, Vinnie — sporting his trademark grin — told him that the two had been "’real persistent, and also had a really infectious, positive attitude,’ so he eventually decided to give it a go." Hard rock and metal fans all over the globe joyously celebrated Vinnie’s return, and HELLYEAH was immediately dubbed “a heavy metal super-group” by press and public alike.

The band’s self-titled debut hit the streets in 2007, entering the Billboard 200 album chart at No. 9.
In 2010, Stampede hit No. 8 on the same prestigious chart, and 2012’s Band of Brothers proved that HELLYEAH was in it for the long haul. “I honestly feel that Vinnie found something with us that gave him that passion again,” Tom states. “HELLYEAH reignited his fire and made him love getting back on stage again. That’s what’s kept us all going for so long – our genuine love for what we do.”

For the band’s ever-growing legion of fans, 2014’s Blood for Blood was the “bar-setting” release they’d been anxiously anticipating since day one. This critically acclaimed album deservedly debuted at
No.1 on the Billboard Hard Rock Albums chart. It also saw the group’s membership stabilize in rock-solid fashion with the introduction of Christian Brady on lead guitar and Kyle Sanders on bass.

As a result of the burgeoning success of Blood for Blood, HELLYEAH toured the globe for 18 grueling yet glorious months. Then, after a mere two-week break, the boys started working on album #5.
The resulting release, 2016’s metal masterpiece UNDEN!ABLE, continued the brutal bombast of its predecessor.

“As well as being one of the best drummers of all time, Vinnie also knew his way around songs really well,” Maxwell reveals. “His input was always really positive and he taught me how to harness hooks and really focus on riffs, while not being busy or disjointed. His philosophy, especially since Blood for Blood, was to write songs that were so musically good that you could listen to them without vocals and they’d still take you for a ride. We really reigned in on that art on this new album, Welcome Home.”

In late 2017, after another successful bout of touring, HELLYEAH started work on album six with their producer from Blood for Blood, Kevin Churko. “Kevin is a huge part of the HELLYEAH family,” Christian Brady states. “He’s brought a lot of things out of this band.” All was going well – really well – until Friday, June 22, 2018, when the heart-wrenching news of Vinnie Paul’s sudden and unexpected passing quite literally stunned the hard rock world into silence. He was 54 years young…

“We were so far ahead with the music that we decided to take a little breather, to give Chad some time to work on his melody lines and lyrics,” Sanders states. “We all left the studio that Thursday evening, Tom and myself flew home on Friday, and Vinnie passed that night.”

The fact that Vinnie had not only completed recording his drums on HELLYEAH’s new Welcome Home album, but was truly delighted with both his performance and the material, is perhaps the only slight glimmer of possible solace regarding his tragic passing. “Once a song was completed to Vinnie’s satisfaction, he’d put his stamp of approval on it and move on to the next one,” Vinnie’s bass playing partner, Kyle, recounts. “He did that for every single song on this album.”

Despite their unimaginable feelings of loss and pain, the four remaining HELLYEAH members regrouped to do what they knew Vinnie would want them to do: finish what he’d started. And driven by their love, loyalty, reverence, and respect for their fallen brother, they did exactly that. The result is Welcome Home – a truly stunning album that does both Vinnie’s memory and groundbreaking legacy proud.

“I was in the studio working with Kevin [Churko] when I got the call…and everything just went blank,” Chad reveals. “It was as if something just reached in and ripped out my soul, my life, my motor-skills, my everything. But, the day after Vinnie passed, I was sitting on a bed and I had a conversation with him just like I’m talking to you now – out loud. And I said, ‘Brother, it would be so easy for me to open my hand, blow, and just walk away from this - but I will not do that. I’m gonna make you a promise right now: I’m gonna finish this because I love you, I respect you,  and this is your last work. I have to finish this. As hard as it’s gonna be, I’m gonna finish this.’ At that point, Vinnie became my muse – he was my fire. He was my sun. He was my everything to get me through this.”

“We all felt Vinnie’s presence and energy in the studio,” Maxwell confirms. “His spirit was definitely there, and it gave us the fire to finish Welcome Home in the way we felt was right and also honorable to him. Chad’s vocals and lyrics speak volumes too – he really dug deep on this one.”

In addition to the nine cuts Vinnie played on, an extra song, “Skyy and Water,” was added. “I wrote the music the day after Vinnie died,” Maxwell reveals. “It’s a very bitter, emotionally draining piece for me. I wanted the sorrow and loss I was feeling to come out in the music, and Chad’s lyrics said exactly what I was feeling. The first time I heard them, it broke me in half. That song is our heartfelt ‘Goodbye and Thank You’ note to Vinnie.”

“My biggest regret is him not being with us to hear the finished album,” Tom concludes. “I can picture it now: Vinnie Paul cruising down Las Vegas Boulevard in his Escalade, cranking Welcome Home to 11 with that famous smile on his face.”
_____________

On May 11, 2019, the band performed live at the Las Vegas House of Blues to celebrate Vinnie Paul’s legendary life and game-changing legacy. The night marked the first time the band has taken the stage since Paul’s passing, and the debut of Stone Sour member Roy Mayorga as fill-in. In a poignant moment during the set, Las Vegas Review-Journal columnist John Kats (Katsilometes) presented the band with an official proclamation from the Clark County Board of Commissioners declaring May 11, 2019, as “Vinnie Paul Day,” for his incomparable role as a musician, and helping make the entertainment industry in the City of Las Vegas what it is today. A portion of the proceeds from the sold-out show were donated to the American Heart Association (AHA) in honor of Vinnie Paul.

The worldwide release date for Welcome Home is set for September 27, 2019.

An 18-city headlining summer outing will kick off on Tuesday, July 23, in Atlanta, and will culminate in a special hometown celebration on Saturday, August 17, in Dallas, Texas. Full routing and tickets available on www.hellyeahband.com. In honor of Vinnie, HELLYEAH is donating a portion of ticket sales from their upcoming tour in his memory, in hopes of raising over $10,000 for AHA.

As Kyle Sanders so succinctly stated: “While Vinnie Paul is obviously irreplaceable, one thing we can’t not do is tour. As easy as it would be to say we’re not going on the road, we have to. Vinnie would be extremely disappointed in us if we didn’t promote this record properly. He’d be pissed off at all of us for putting all this work into finishing the record and then just letting it sit there on the shelf while we put a couple of songs to radio and whatever…and we know that.”
Nonpoint 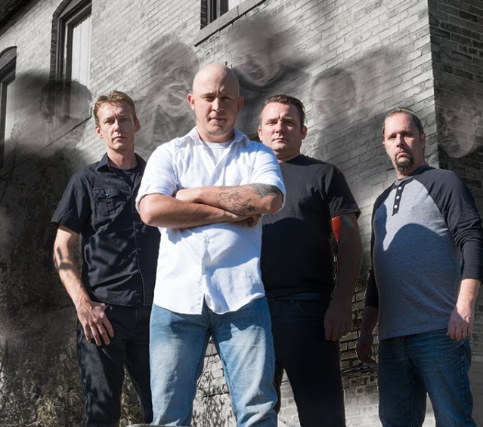