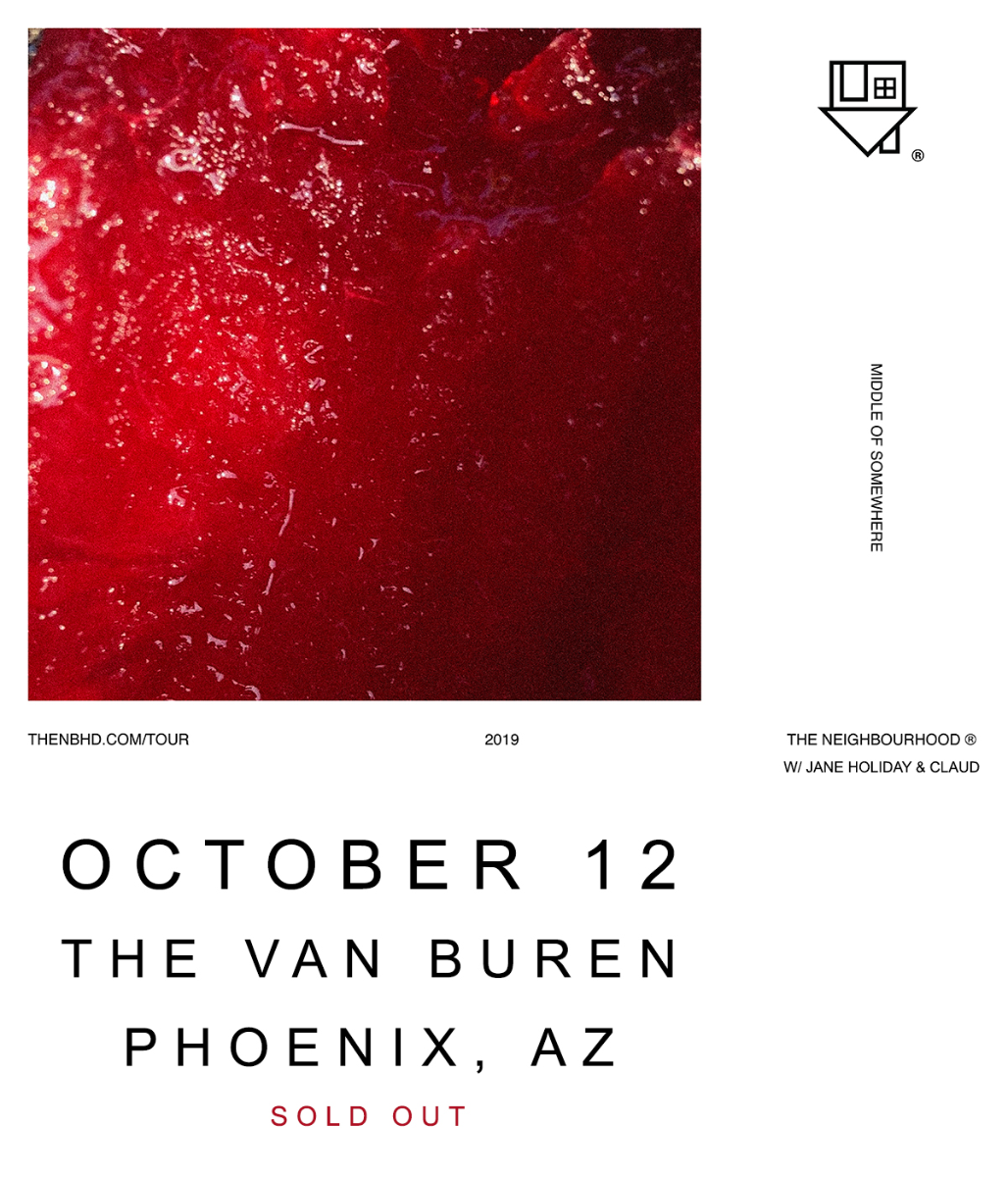 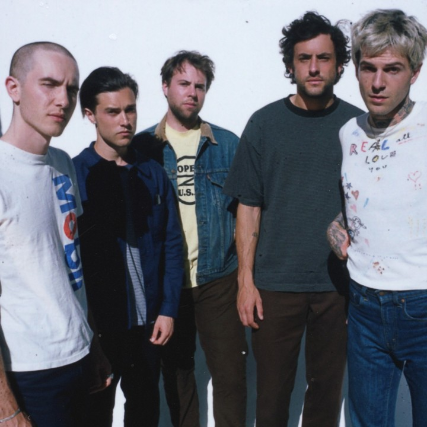 Hanging out with The Neighbourhood is as close to being at a clandestine mafia meeting as you can get in the realm of rock'n'roll. They dominate an Italian speakeasy in West Hollywood like a squad who mean serious business on a weekday afternoon. Ringleader Jesse Rutherford wolfs down a spaghetti carbonara, while the others send up their favorite local sandwich joint that was mysteriously closed this morning. Rutherford brought this pack of music nerds together out of Newbury Park, California in 2011 and with the help of breakout song “Sweater Weather” they became viral sensations. Today Rutherford looks like the kind of emo punk character that could have rolled out of an MTV TRL broadcast in 1999, but his mind is somewhere in 2099. He's at the epicenter of this motley crew, which is completed by guitarists Jeremy Freedman and Zach Abels, bassist Mikey Margott and drummer Brandon Alexander Fried, who strolls in late with an update on the sandwich joint.

Central Hollywood and East Hollywood is The Neighbourhood's domain. They don't go to Downtown right now, nor do they hang out in Beverly Hills. "Unless we're going shopping on Rodeo," offers Rutherford, only half-joking from behind a pair of women's pink Chanel shades. The speakeasy suits them to a tee. Decked out in chequered red and white tablecloths, with an air of old Hollywood, it's straight-up rock'n'roll, complimenting their leather jackets, tattoos, and various piercings. "It's moody," offers Abels.

For all their debauched appearances, however, these guys don't do anything other than work. They're ridiculously prolific. In the past six months alone they've put out two EPs (titled Hard and To Imagine), prepared a full-length third album (self-titled The Neighbourhood), and have another EP (called Ever Changing) in the works to follow that in 2018. And Rutherford has the audacity to say, "You haven't even heard half the stuff we have." For a year they've been in LA studios around the East side, Atwater Village and North Hollywood with Lars Stalfors, who's produced many hard rock acts such as HEALTH, Lil Peep, St Vincent and Cold War Kids. Stalfors has found a way to weave their frantic, ADHD approach to music together. The Neighbourhood aren't just a band, they're more akin to a self-sufficient songwriting house. A modern-day Brill Building for alternative pop, if you like. Except their HQ is made up of their individual bedrooms, spread out across Hollywood.

"We all have very different tastes," says Margott, sporting a vintage Janet Jackson t-shirt. "We're all very creative. Everybody has their own ideas and we throw them in a pot and whatever sticks out the most is what comes to fruition." Rutherford adds that the happiness of the band depends on making a lot of different types of music, so that everyone feels represented. That's why this latest series of works flits from urban pop to electro rock, hip-hop to '80s disco. "We know it's possible for us all to agree on something," says Rutherford. "When we do, the feeling is so good that it's worth it."

The Neighbourhood are almost ahead of the curve in terms of the eclecticism of their tastes. Since the birth of their original mixtape #000000 & #ffffff, they've contended with challenging the listener to be excited by artistry that colors outside the canvas, an outfit that's not satisfied to be defined as just one thing. It speaks to where pop music, and particularly the most interesting strands of alternative pop music, is at in 2018. "We find common ground in pop," agrees Rutherford. "That's what we're reaching to achieve."

Hard, which was the first EP released last September, harks back to that aforementioned original mixtape. The title aptly reflects its sparse, bare-faced nature, stripping their sound back to beats and grit and grime. "We wanted to just be us," explains Rutherford of the decision to return to their roots. The idea is to build a bridge between where the band were and where they are now. Hard takes us back to 2011. To Imagine takes us to the present day. "It's showing what we can do as a group," he reasons, further explaining that this collection, which will form part of a four-part, stream-friendly 'playlist', alongside the album and third future EP, will document the full evolution of his band.

The self-titled album, however, is very much where they're at now. The album as a format is something that Rutherford still holds in high regard. It's a moment, something a little more definitive, a statement of what The Neighbourhood is as an entity. It has to be solid. With the EPs, however, the band can be a little more carefree, and showcase all the varied tricks they have hidden up their sleeves. "The Neighbourhood can make a whole palette of sounds," says Abels. "The album has more of an arc to it," adds Rutherford.

Indeed The Neighbourhood touches upon some very LA themes: "cocaine shit" (those were Rutherford's words) on “Flowers”, over-dependency and vulnerability on “Scary Love”, and the neurosis of living under the social media microscope on “Sadder Daze”. The latter in particular is a song that relates to our most pressing generational concerns. "You don't need to be an artist to be affected by the internet. Don't you guys feel that because of the internet you're constantly comparing yourself to other people?" Everybody nods. "You need social media to flourish but it also gets in the way of yourself."

Despite the anxieties documented in the lyrics, the band go into this release with a newfound confidence. The contributions in the studio are the product of an equality-aspiring democracy. As they've gotten older and more capable, the levels of trust and communication have improved. Everyone's ideas are heard. And Rutherford, who has an idea every ten minutes, has his own solo project as an outlet now for all the things he doesn't need to bring to The Neighbourhood table any more. That takes a substantial amount of tension and pressure out of the room. "We get along way better," he says. "I don't have any focus. I'm all over the place, I have so many ideas I need to get out of me and I like doing it that way - outside of the band." They've also proved themselves as a sustainable model. "Everybody is making stuff for their own pleasure," he continues. "We have so much material that the pressure's gone so we can have fun again. Nobody's telling us we have to do this to eat. We're gonna eat. We're gonna be fine."

Rutherford is less enamoured by a request to attribute some kind of meaning or significance to the fact that the band seem to have left their signature black-and-white aesthetic behind. They've discovered colour! Although Rutherford is insistent that abandoning monochrome is not something he wishes to make a big deal out of. "It's not like it's gonna make the five o'clock news," he scoffs. "I wish!" Becoming brighter is something they've been building into things gradually, and the die-hard fans have already picked up on it. A sprinkling on a sleeve here, a flash at the end of a music video there. The forthcoming video for lead single “Scary Love”, however, will be shot using the full spectrum any rainbow has to offer. "We're losing that gimmick but if we wanna do something in black-and-white we'll still do that," explains Rutherford.

Stalfors aside, the album also features collaborations with pop guru producer Benny Blanco (The Weeknd, Ed Sheeran, Lana Del Rey) and Dave Sitek of TV On The Radio on the song “Sadder Daze”. Rutherford works with Blanco away from the rest of his bandmates. "I love writing with Benny, it's one of my favourite things ever," he says. "Both of us have very similar energy. It feels like I'm playing with the team I'm supposed to be playing with - the big dogs, or whatever. He's fast as shit, has great taste and he's just fun." Sitek on the other hand was more of a mentor, lecturing them one-on-one about how to be true artists. "He presses buttons as you're playing and suddenly cool stuff starts to happen," says Rutherford. "It's intimidating but in the best way."

The tools the band acquired from working with the best in the game has helped them manifest the most quintessentially Neighbourhood album of their career, one that delivers on their diversity of interests and nods to the spectrum of artists they've championed throughout their lives in music. What's more, its method of release is forward-thinking, and forms part of a bigger picture, combining the prior two EPs and beginning the road that leads to the next EP that comes later this year. Together the two EPs, this album and the future EP will form a playlist for fans to delve into. Staying true to their tradition of being forward-thinking, the band took inspiration from the idea of a playlist from Drake's More Life, the idea of a living, changing release from Kanye West's The Life of Pablo and applied both to their own release. The innovative release strategy should come as no surprise considering the band has been working this way for years. In that sense, it's hard to imagine The Neighbourhood ever changing. 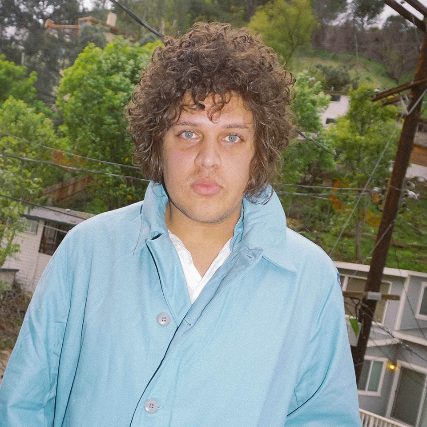 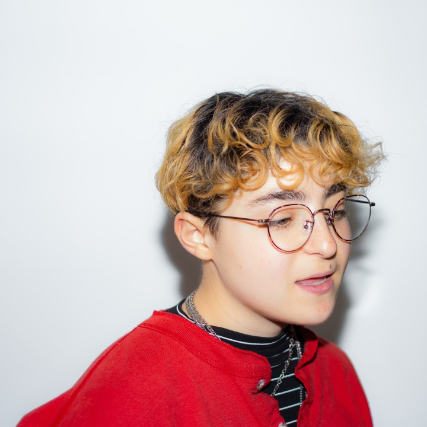 Claud is the solo project of Claud Mintz. After releasing their debut EP that was made out of their college dorm room under the name Toast with Terrible Records, Claud dropped out of college to pursue music full time. Following a quick stint in Los Angeles to be closer to family, they soon relocated to New York City and the Sideline Star was born. The EP came out of a dark period of transition and growth that ultimately resulted in Claud’s evolution as an artist and a 20-year-old closer to finding themselves and belonging. The project chronicles relationships, friendships and feelings of being an outsider amongst a massive transition through their tender pop anthems. They’ve since toured and played with the likes of girl in red, The María’s, Clairo, Triathalon, and more.