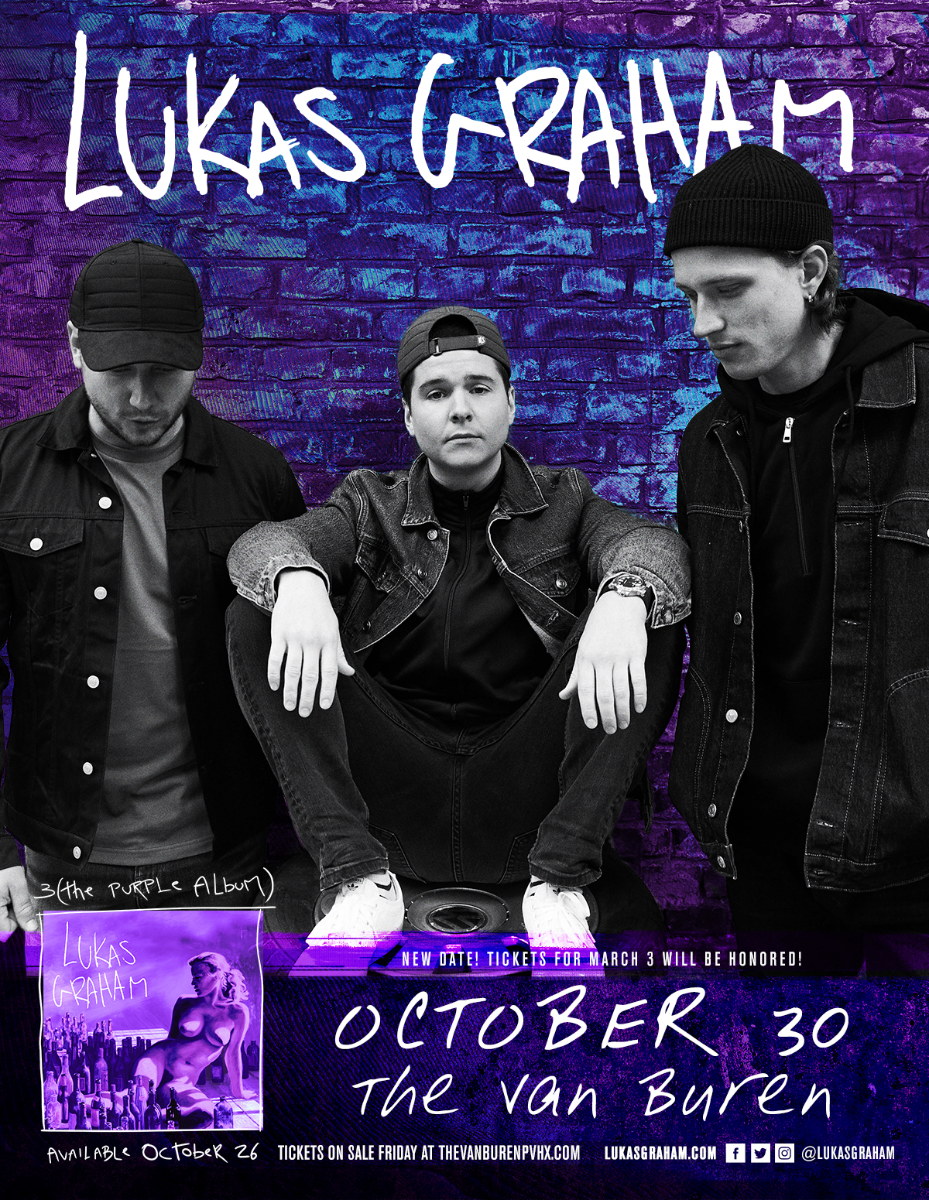 **Rescheduled from March 3, tickets from this date will be honored**

Every qualifying ticket purchased online for Lukas Graham includes your choice of a CD or digital copy of the new album, 3 (The Purple Album), released on 10/26/2018. You’ll receive instructions via email on how to redeem your album after ticket purchase. US/Canadian residents only. One CD per online ticket. Not valid for Fan to Fan Resale 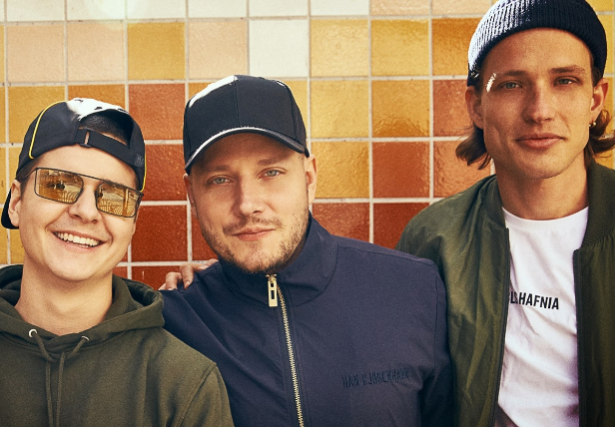 Lukas Graham wears his heart on his sleeve at all times, so it’s entirely fitting that “7 Years,” where he candidly summarizes his life, his losses and his future hopes and dreams, would take the Danish singer—already an acclaimed star in his home country—to the next, stratospheric level. Released at the tail-end of 2015 and lifted from his self-titled global debut, “7 Years” snowballed throughout 2016, racking up over 20 million units in worldwide consumption, hitting number one in 13 different countries, and ultimately garnering three Grammy nominations. But Lukas Graham is far from content with such accolades: He’s restless and ready and wants to be known as an artist that supersedes any smash he may have past or present. With his new full-length, 3 (The Purple Album), the singer looks set to do just that.

Thirty years ago his mother gave birth to Lukas on their couch in Christiania, an impoverished enclave of Copenhagen—a commune established in 1971, famed for its cannabis trade and ultra-liberal ethos. As Lukas tells it, he grew up in a progressive community that to this day lies at odds with the rest of the Danish capital; as a teenager hanging with his friends, strip searches and police brutality were the norm. It’s these formative, resonant experiences that Lukas explores on the album opener “Not a Damn Thing Changed.”

“I still live two blocks away from where I grew up, I still hang out with the same guys, I still go home to visit a friend and, oh, he’s not home because he just got arrested,” Lukas explains. "The song is also a tribute to one of the guys I grew up with who hung himself in January. He was three months older than me and we walked through life together. He was going to be the first of our friends to turn 30.”

It sounds like a bleak opener, but it’s also defiant, his lyrics underpinned with love for his community and bearing the same steely determination he’s always had to make something of himself, except now, thanks to his international success, the goal posts have shifted: “I got a few records to break,” he sings. In truth, as much as “NADTC” sets up a same-as-it-ever-was scenario, the song serves as a critical bridge, because in the past few years Lukas has gone through a personal evolution as immense as his record sales. Most notably, in 2016 he proposed to his long-term girlfriend Rillo Schwartz (they’ve been friends since they were 18), and they’re now proud parents of a little girl, Viola.

Rewind to 2013 and Lukas was in an entirely different headspace, mired in the unexpected death of his greatest champion—his father—and spiraling into a relentless cycle of alcohol, partying and performing, which resulted in the temporary loss of his voice. These days he’s working out almost every day (gymnastic rings are a firm favorite), he’s 30lbs lighter, and he rarely drinks. Whereas Lukas Graham saw his grief loom large, on 3 his father appears minimally, but poignantly, particularly on “Lullaby” (dedicated to his daughter), and “Church Ballad” where, like a movie’s climactic final scenes, Lukas details walking down the aisle to meet Rillo at the very altar where his father was laid to rest.

“These are very big emotions,” says Lukas. “I was afraid of making a whole album about my daughter, just like I was afraid of making an album all about my dad. I wrote a lot of poetry and music about the death of my grandad because writing from that feeling of grief is a really powerful tool. But if you stay there you’ll get stuck and my dad said don’t get stuck in that feeling.”

Written and recorded almost entirely between September 2017 and April the following year, Lukas spent two months in Copenhagen before decamping to LA with Rillo and Viola to finish the record alongside the same team as the last album—“his boys,” producers Morten “Rissi” Ristorp, Morten “Pilo” Pilegaard, songwriter Stefan Forrest and engineer David LaBrel. Together they create a special kind of alchemy: hooks that are easy and instantly memorable, with first single “Love Someone” being a pitch perfect example. Over simply plucked guitar chords Lukas wades through the vulnerability that comes with understanding the higher the stakes, the greater the loss.

“The struggle is easier—no expectations in the struggle,” admits Lukas. “After Viola I realized I could lose this, I could lose my family and my spouse if I’m a dick. But it’s not a sad love song, it’s a positive message.”

Elsewhere gospel refrains and string-laden soul (“Hold My Hand”) slot neatly next to sparkling, R&B singalongs (“Unhappy”). At the album’s center stands, “You’re Not the Only One (Redemption Song)” where Lukas turns his gaze outwards, name-checking his musical heroes Bob Marley and John Lennon. It’s a cry for unity and love in these fractious and internationally uncertain political times. He’s not claiming to know the solution, but understands change begins at home, quoting Chinese philosopher Confucius: “If your plan is for one year plant rice; if your plan is for 10 years plant trees; if your plan is for 100 years educate children.”

And yet, it’s when Lukas’ lyrics are direct and diaristic, that he truly excels. It’s in the universality of the deeply personal that the listener can extrapolate the complex nuances of human relations. For instance, the aforementioned “Unhappy” picks apart the communication breakdowns that occur between any two people trying to grow together: “I’m trying to pick up on all the signs / Read between your lines,” he sings.

“I don’t think it’s a man-woman thing, it’s a partnership thing,” Lukas says. “Accepting that communication gap is sometimes one of the most powerful things you can do. If we fight, let me be the one by your side.” Lukas continues to dig deeper still on “Everything That Isn’t Me” he comes to terms with the boy he was and the man he’s becoming, while “Promise” and “Stick Around” contends with the pressure of mounting responsibilities and the push and pull of being a touring family man. The latter song makes Rillo tear up every time.

Throughout, Lukas’ self-assessments remain unflinching, and never more so than on “Hold My Hand.” “I’m an asshole sometimes,” he says, expanding on the theme, “You know, I’m not always the best spouse, or dad, or son, or brother, but will you hold my hand anyway and walk with me to the end?” Surprisingly, despite the seismic subject matter, 3 offers a melodic lightness that ensures an uplifting shoutalong almost every time, and this was by design.

“I want people to dance,” he says simply. “It’s a more mature record, definitely, but it has more life in it.” And it’s the life that he’s living, one shared so openly, that allows us all to feel a little less alone. 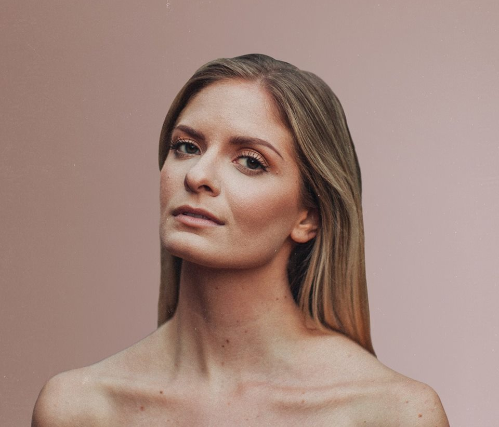