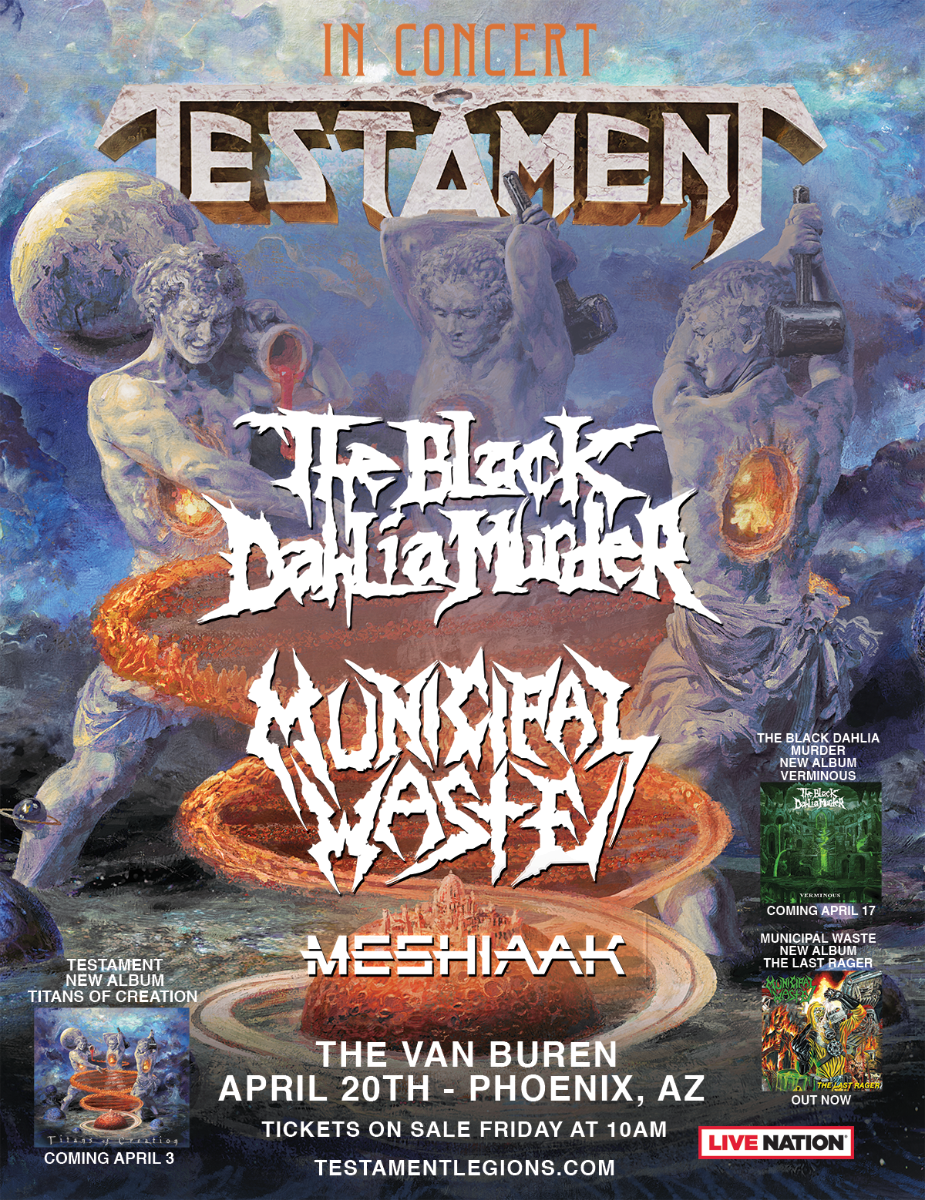 Phoenix -- due to circumstances outside of our control this date has been POSTPONED -- stay tuned and hold on to your tickets as this show will have a TBA date! 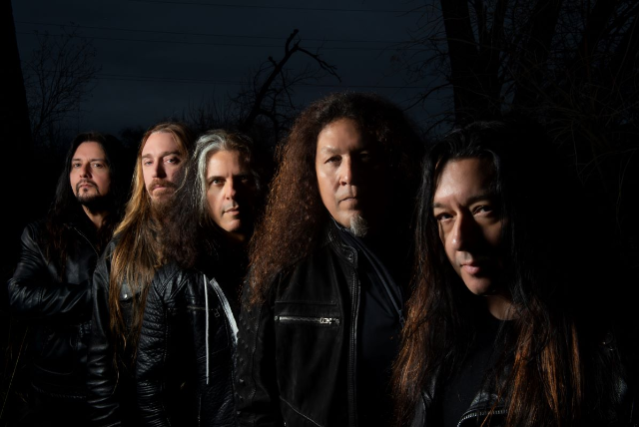 The time has arrived for​ TESTAMENT​ to unleash new thunder to the masses and reveal theirthirteenth studio album: ​TitansOFCreation​. Just as the elements of this planet thrive within all livingcreatures, each musician in ​TESTAMENT ​represents a necessary component of this latest musicalendeavour. Still filled with a massive and unstoppable energy since their last release, ​TESTAMENThas taken their style to the next level and present an album that is loyal to the roots of traditionalthrash metal while still bringing alluring, brilliant, and progressive ingredients to the table. Bass isshowcased, new vocals are introduced, and as expected, the guitarwork of ​Peterson ​and ​Skolnick ​isgreatly complex and mesmerizing.Eliran Kantor​ stepped up once again to create a new piece of artwork for the cover of this release.His classic, almost Renaissance style of painting melds beautifully with the ancient, psychological, andenlightened subject matter of the songs. Three monstrous titans stand in the place where the planetsare formed. One pours molding liquid which the others hammer into human DNA, twisting and turninginto the ring of a newborn planet. Each titan has the flame of a dying star burning in their chest; theorigin of the atoms making up the bodies that are bubbling and boiling on the curves of the spiralinghelix.TitansOFCreation​has many moods and material contained within; all of which somehow tie into acommon philosophy of creation and its necessary counterpart: destruction. “​Children Of The NextLevel​” smashes through the gates as the opening track with a flood of sound that prepares the listenerfor an abundance of violent thrash. Meanwhile, the lyrics rage about the outrageous philosophies ofthe Heaven’s Gate cult (founded in 1974).Songs like “​Dream Deceiver​” carry more old school sound that will tickle the senses of any commonTESTAMENT​ fan. The lyrics describe being trapped in a dream by an otherworldly female force who isslowly working to degrade the mind. Dreams are part of existence, but when we are asleep we arePromotional contacts:Germany, Austria, Denmark, Italy, Norway, Spain & Rest:​​peter@headofpr.comAustralia: ​john@riotact.com.au​​| BeNeLux: ​maurice@nuclearblast.deFinland: ​silke@nuclearblast.de​ | France: ​valerie@jmtconsulting.frSweden: ​darren.edwards@mac.comSwitzerland: ​Hansjuerg.Staempfli@warnermusic.com​ | UK: ​claire@nuclearblast.co.ukUSA: ​kristin@nuclearblastusa.com​ I Poland: ​adam@mystic.pl
entirely vulnerable; one of the many mysteries of being human. “​Someone’s haunting you and won’tleave you alone; the only time they pick at you is at night when they can control the way you sleep,​”describes vocalist ​Chuck Billy​.“​Night of the Witch​” features frightening and captivating vocals from ​Eric Peterson​. Carrying a vibefar more akin to Black Metal, Peterson swoops in with a power that melds perfectly with Billy’s groundshaking, guttural growls. Taking some influence from ​Robert Egger​’s 2015 horror masterpiece “​TheVVitch: A New England Folktale​,” the song carries with it a magical quality that directly reflects themood of the film. At the very end of the track, a theremin howls through the air much like witches risingtowards the moon; setting the final tone. “​The album has a lot about it that’s fresh to the ear​,” explainsPeterson.Written by guitarist ​Alex Skolnick​, “​Symptoms​” is filled with detailed with intricate guitar work thatwell represents the complicated and spellbinding journey that comes along with handling depression,mood swings, and a countless list of mental health frustrations. The lyrics in this song discuss a sadtruth: that mental illness is more common than we all think, and than many of us are willing toacknowledge. On a lighter note, a vibrant track entitled “​The Healers​” swings back and forth betweenwaves of death and thrash, heavy and melodic, light and dark. The words are spiritual, and extremelypersonal. They describe Billy’s own experience dealing with all natural medicine men; the elders of theearth, and how they managed to help him pinpoint and heal his past illness. “​City Of Angels​” comesbearing an entirely new sound for ​TESTAMENT​. The creeping sludgieness and slow, stalking tempo,walk hand in hand with the almost unbelievably gruesome tale of the Nightstalker ​Richard Ramierz​,all combining to form another stand-out track on the record.In 2020 the days of writing an album all together in one room are far gone, but to be able to takeadvantage of technology allows for ​TESTAMENT ​to go about a very similar writing process to whatthey always have. Basic songs are molded, structures are added by everyone in the group,instrumentals are highlighted, and finally the lyrics and vocals are created to finalize the sonic story.Facetime and human on human contact still remain crucial elements to ​TESTAMENT’​s song writingprocess and at some point throughout, every member physically interacts and writes with one another.In between writing this album, the band toured relentlessly which allowed for less stress, more time inbetween, and greater inspiration for this album cycle. There was also plenty of anxiety-free andlevel-headed time for pre-production and the initial recording process with ​Juan Urteaga​ of ​TridentStudios.​​Andy Sneap ​was then able to tweak, mix, and master this album to his usual perfection.TESTAMENT​’s process of creation has evolved and progressed yet they’ve remained steadfast overthe course of literal decades. While always managing to present the genuine aspects of thrash metalthat solidify their existence, they spread into unique horizons through developing crisp and fascinatingsounds.
The Black Dahlia Murder 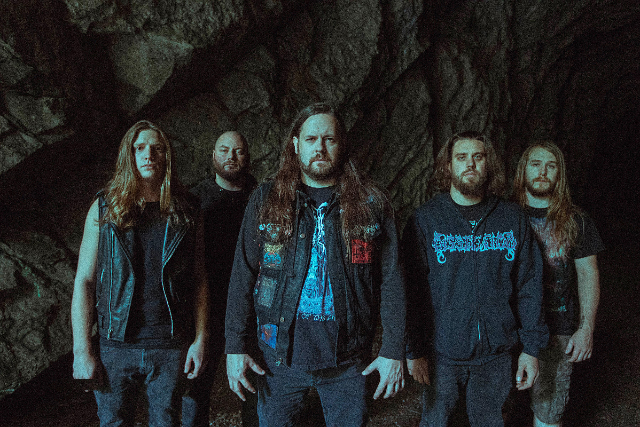 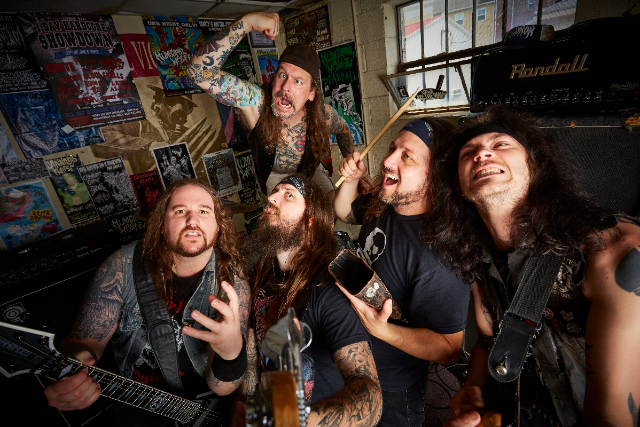 So what happens when a band’s riotous reputation catches up with them? Precautionary
measures are taken and they - of course - get banished, only this time, it’s into space! When
the greedy ship captain hordes the food rations, the crew kicks into survival mode, commit
mutiny, and devour their captain skewing the story into a horrific yet fantastic cannibalistic
voyage into space that cult movies are made of.
The Fatal Feast, the fifth studio album by Richmond, Virginia’s cross-over kings MUNICIPAL
WASTE, not only ponders the type of moral dilemma faced in the title track but also tackles
earthly issues that consistently plague humanity (“Covered In Sick/The Barfer,”
“Repossession,” “Standards And Practices,” “12 Step Program,” “Crushing Chest Wound”).
These 37 minutes of new music consolidate the best of everything the band’s got to offer:
their utmost respect for headbang-inducing riffs, their trademarked aggression, their
tongue-in-cheek sense of humor, and their talent for extracting meaning out of the absurd.
Meshiaak 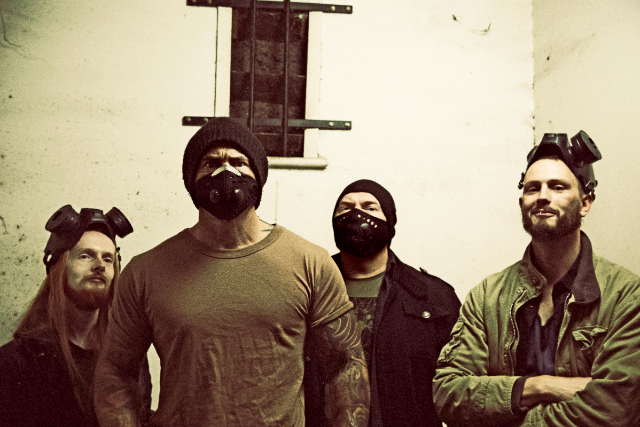 Meshiaak return with their blistering second album 'Mask Of All Misery,' which will be released on 15th
November, via Mascot Records.

It has been three years since the Australian quartet's debut album 'Alliance of Thieves' dropped, which
married dark undertones, heavy grooves and sophistication whilst retaining old-school metal values.
Upon its release Metal Hammer applauded its "modern power/thrash metal
attack," Powerplay exclaimed that the album "bludgeons and berates the senses with incredible
precision and astounding musicianship" and Classic Rock revelled in the "mix of brooding progressive
metal and heavy rock."

So, it's no surprise then, that the band are back to continue the story and have a new member and
renewed energy. Formed in Melbourne, by 4ARM's Danny Camilleri and Teramaze's Dean Wells with
bassist Andrew Cameron, they have recruited drummer David Godfrey who replaces Jon Dette,
following his departure due to logistical reasons with him being based in the US and the rest of the band
in Australia.