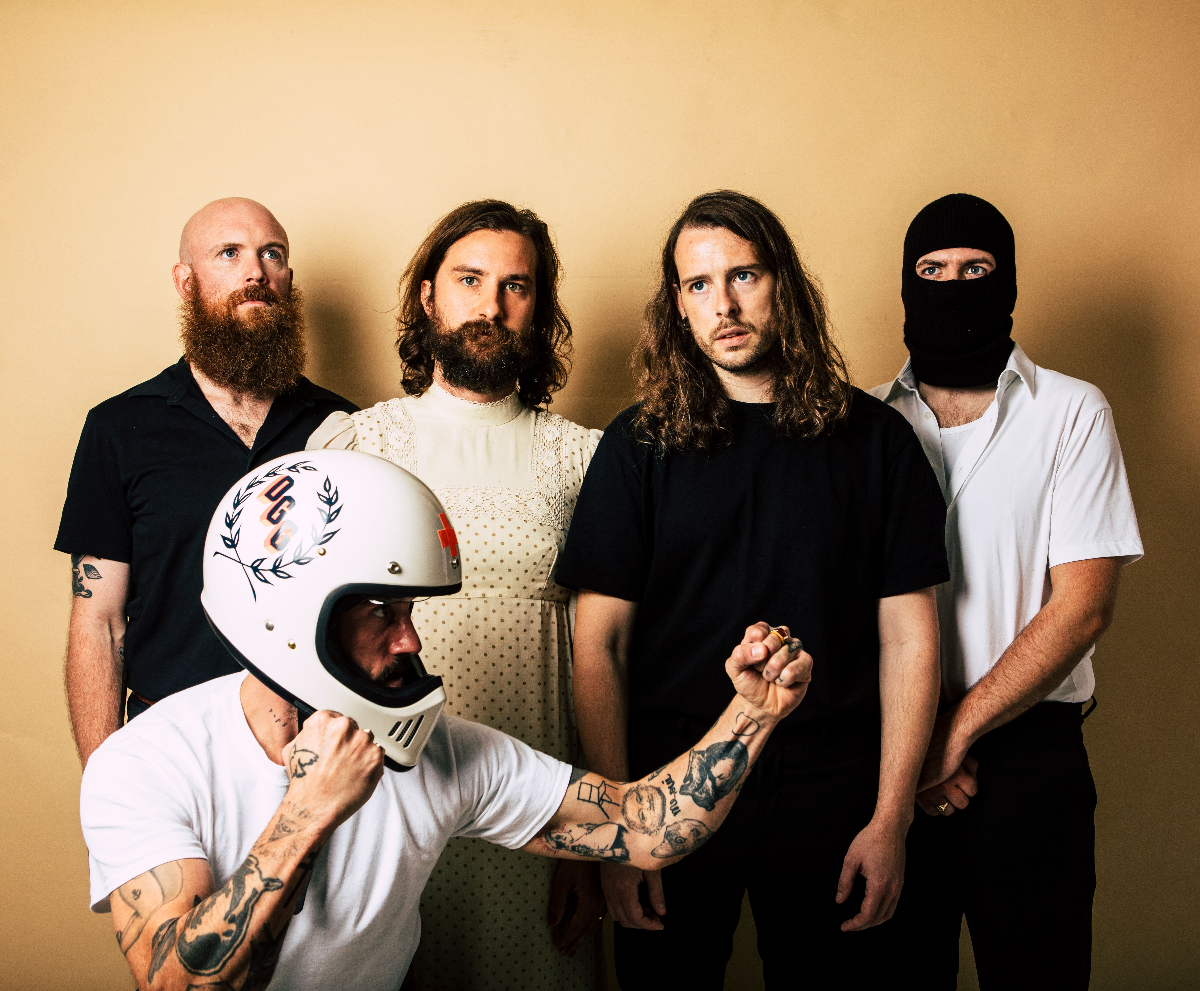 
Based on the latest local guidelines, attendees are no longer required to provide proof of negative COVID-19 test AND/OR vaccination for entry into this event. Be sure to check your venue website for the latest updates and guidelines as entry requirements are subject to change. 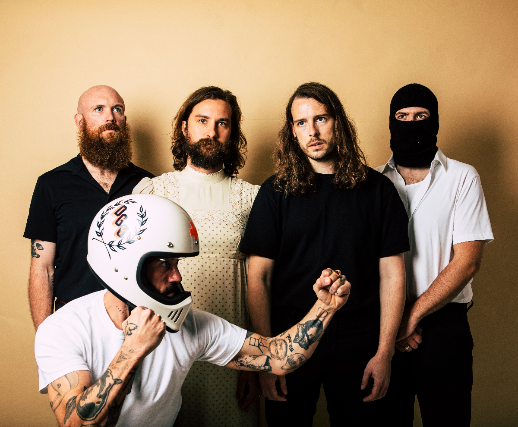 Late one night from the driver’s seat of his car, IDLES frontman Joe Talbot watched a motorcyclist race past him on the highway at nearly 130 miles an hour. The rider was inches away from crashing into Talbot's car. In that singular moment, with the fragility of life and death so blatantly on display, Talbot began to reflect on his own trajectory and chronicle the formative moments therein, both literally and metaphorically.

“I’ve been a car crash.” he says. “Being an addict is part and parcel of who I was for years and years. Watching that motorcyclist felt like the start of a new story -- reflecting on addiction in a forgiving, empathetic and sympathetic way. Allowing yourself the room to breathe and forgive, but also taking responsibility for your actions.”

These forks in the proverbial road of life, and the consequences of choosing which way to turn, form the narrative backbone of “CRAWLER,” the fourth IDLES album in as many years and the follow-up to 2020’s “Ultra Mono,” the U.K. band’s first No. 1 album. If “Ultra Mono” was, in the words of guitarist Mark Bowen, “kind of like a caricature of our identity that helped us see it for all its flaws,” “CRAWLER” is an album of reflection and healing amid a worldwide pandemic that stretched the planet’s collective mental and physical health to the breaking point.

Talbot says, “We want people who’ve gone through trauma, heartbreak, and loss to feel like they’re not alone. This album shows the ugly side of where those things come from, but also how it is possible to reclaim joy from those experiences.” He adds, “Before his assassination, Trotsky knew that Stalin's men were coming over to kill him. He knew he was going to die. What did he do? After watching his wife out in the garden, he wrote in his diary, ‘in spite of it all, life is beautiful.’ A week later, he gets an icepick in the head. He was just happy to sit in his garden watching the person he loved most do what she loved. I think that’s a beautiful thing.”

For Talbot, “‘CRAWLER’ is like the character of me in the dark warmth of my addiction — a crawler, a night crawler, someone on their knees, someone praying, someone surviving. The grit of it. The weight of the world on you. All of those things is a ‘crawler.’”

Indeed, on “CRAWLER,” those stories run the gamut from literal car crashes (the dark, tense opener “MTT 420 RR,” “Car Crash”) and dancing with random Spanish men in futile late-night attempts to keep the party going at the club (“When the Lights Come On”), to aspirational tales of working hard, setting goals and seeing them through to fruition, no matter how insurmountable they may seem (“Crawl!,” “The Beachland Ballroom,” an honest-to-goodness soul song featuring a gorgeous, gripping vocal performance from Talbot).

Says Talbot, “This whole album, I tried to be more of a storyteller than I’ve ever been before, and more poetic, which I think is more honest, in an ironic way, than trying to be as blunt and down the line as possible.” Bowen says this newly varied palette gives the album the feeling of a true shared journey: “I thought it was important to include a lot of the songs that deal directly with trauma and the immediate reactive responses to trauma in the first half. Then, you have the more head-on stuff later — the realization and the dealing with it.”

IDLES albums have always been anchored by these overarching themes and concepts. But the ability of the band (which also includes guitarist Lee Kiernan, drummer Jon Beavis and bassist Adam Devonshire) to juxtapose beauty and rage with humor and drama has never felt more satisfying than on “CRAWLER.” To hear Talbot command the listener to “shake your tiny tushy” on “The New Sensation,” compare a mangled motorcyclist to a “jelly roll” dessert on “MTT 420 RR” or appropriate text messages from his former drug dealer to be screamed as lyrics on “Wizz” is almost like hearing IDLES for the first time all over again.

“One of the big things about writing this album was that we wanted to experiment and progress and evolve in our songwriting,” says Bowen. “Every time we did so, we had to think, what would we do? A really important aspect of our identity as a band is humor, and not taking ourselves too seriously. Obviously, we deal with quite serious subject matter, but it is often done with a tongue firmly placed in cheek.”

These stories are vividly brought to life through IDLES’ most soul-stirring music to date, recorded under the pandemic-era supervision of producer Kenny Beats (Vince Staples, Freddie Gibbs), there are, of course, numerous moments that will inspire absolute mayhem in a packed concert venue come fall 2021, like the warped glam rock of “The Wheel,” the 30-second grindcore slap to the head of “Wizz” and the unhinged, pulverizing bass-and-drum groove of “The New Sensation.” But there are also fresh textures and experiments that push IDLES into thrilling new territory, like the alternate universe marching band anthem “Stockholm Syndrome” and “Progress,” a “mantra of realization” that soothes both body and mind in a way few IDLES songs ever have before.

Says Bowen, who co-produced the record alongside Beats, “Kenny was constantly asking questions: ‘What’s a crawler?’ ‘Why are you doing this here?’ He would facilitate things through those questions, because you’d kind of get put on the spot, and you’d have to work things out to answer them. The way Kenny and I talk about music is very much from a hip-hop or electronic point of view. Drums are primary. The main thing that’s got to happen is that it’s got to slam and pull you along. Oftentimes, I second-guess the more insular, esoteric songs. Kenny would say, ‘Why are we recording this again? Let’s just use the demo. The demo has the feeling. You don’t need anything else here.’”

“I don't really see us as a ‘rock band’ and working with Kenny freed us of the idea of genre,” Talbot enthuses. “On this album, our dissolution of ego was helped by Kenny’s humble nature and willingness to learn. He has boundless fucking passion for making the best song possible. Not the best ‘rock’ song — the best song possible, whatever song we’re working on that day. That’s something we’ve always wanted.”