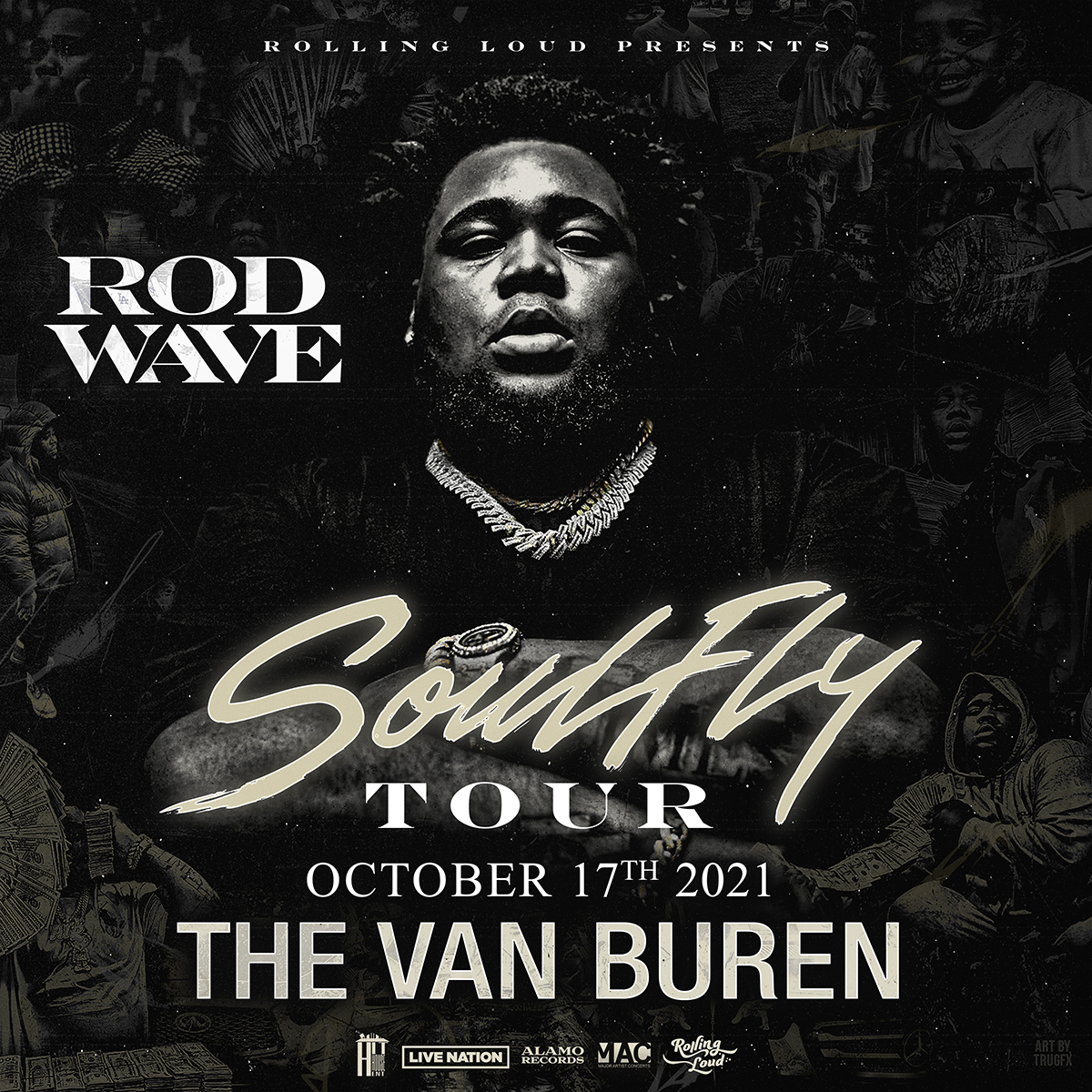 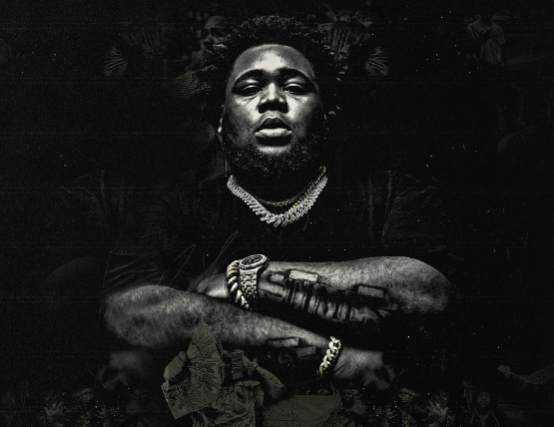 Blessed with a special singing voice, and the knowledge of how best to use it, Florida's Rod Wave is taking his own path to the top of the game. Coming through with a soulful set of Southern sing-raps, the St. Petersburg native has built a groundswell of regional support and blossomed into a national streaming phenomenon. After releasing 3 projects in a 12 month span – Hunger Games 3, PTSD, and the platinum-certified Ghetto Gospel – Rod first erupted onto the scene with “Heart On Ice.” The single, propelled by a captivating Genius Open Mic performance, a viral TikTok trend, and co-signs from NFL star Saquon Barkley to 21 Savage and everyone in between, was certified 2x-platinum, peaked at #25 on the Bllboard Hot 100 charts and reached #1 at urban radio. Rod’s debut album, Pray 4 Love, debuted at #2 on the Billboard 200 charts and was certified platinum less than a year after its release. The album’s breakthrough single, “Rags2Riches,” exploded over the summer with a viral TikTok trend and a remix from Lil Baby, peaking at #12 on the Hot 100. Rod’s sophomore album, SoulFly, surpassed Pray 4 Love by becoming Rod’s first-ever #1 album on the Billboard charts. Lead single “Tombstone” is Rod’s highest-charting single to date, peaking at #11 on the Hot 100.
NoCap 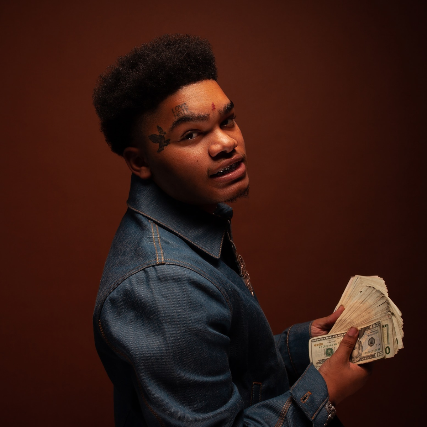 Alabama rapper NoCap got an early start in performing, rapping onstage by the time he was nine. When he reached his late teens, he developed a style that incorporated emphatic Auto-Tuned singing and soul-searching lyrics about growing up within a dangerous street life. After releasing a few tracks online, NoCap broke through with several viral singles. He kept this momentum going with mixtapes like 2019's well-received The Backend Child and 2020's Steel Human.

NoCap was born Kobe Crawford in Mobile, Alabama, and got into music through the mentorship of a man his mother was dating. With this man's help, NoCap and his brother began performing live shows locally, rapping and singing while they were still just children. When the romance between his mother and this early mentor fizzled, the young rapper took a break from music until his teenage years, when he came back with an intricate and emotionally reaching style comprising sometimes-rapped, sometimes-belted sung vocals. In 2017, he began releasing music online. By the next year, he'd broken through with the single "Legend," as well as his debut mixtape, Neighborhood Hero. NoCap also collaborated with Atlanta rapper Rylo Rodriguez in 2018 on the Rogerville mixtape.

The following year, the fully formed mixtape The Backend Child arrived, with buzz surrounding the heart-wrenching single "Ghetto Angels." The mixtape featured guest spots from like-minded rappers OMB Peezy and Quando Rondo. Before the end of 2019, he returned with another lengthy mixtape, The Hood Dictionary. The 16-song collection doubled down on the confessional, gospel-tinged style of his previous project and featured a remix of "Ghetto Angels" featuring new verses from Lil Durk and Jagged Edge. In July of 2020, NoCap surprise-released the mixtape Steel Human. The 16-song project included guest appearances from rappers such as DaBaby, Boosie Badazz, and Lil Uzi Vert. 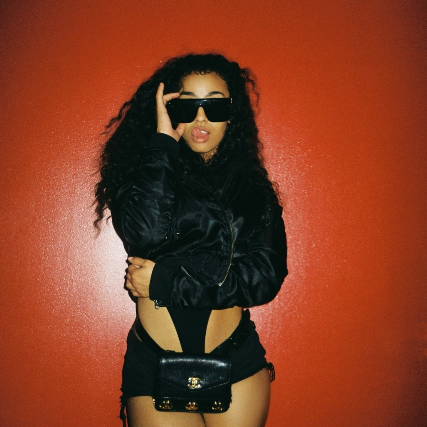 Rubi Rose switched up her role in the music industry, going from modeling and appearing in videos for other rappers to making tracks of her own. After debuting in 2018 with a feature on a Playboi Carti song, Rose highlighted her brash, sexually explicit lyrics and effortless rhyme skills on singles like 2019's "Big Mouth" and her 2020 debut mixtape For the Streets.

Rose was born in Lexington, Kentucky in 1998 and moved to Atlanta in her teens after spending her childhood in Switzerland. She became involved in modeling, and in 2016 she was one of the featured models in Migos' smash hit "Bad and Boujee." She also appeared in other videos around this time as her social media fame grew. During a time when she was dating Playboi Carti, she contributed a verse to his 2018 song "On Top." After this foray into rapping, she sharpened up her style somewhat for her debut 2019 single, "Trickin'." Buzz for the song was significant, but it was topped by her next single, "Big Mouth," which arrived in June of the same year. Rose signed on with Hitco Entertainment and had a fruitful 2020, contributing guest features to songs from Wiz Khalifa and Day Sulan, sharing new singles of her own, and also releasing her debut mixtape For the Streets, an eight-song project that included collaborations with Future and PARTYNEXTDOOR. In 2020 Rose also made an appearance in the video for Cardi B and Megan Thee Stallion's joint single "WAP," an international chart-topper with a video that would be viewed hundreds of millions of times. The next year Rose continued releasing new singles, offering up new tracks "TWORK" and "Poke," as well as appearing as a guest on collaborative tracks with Trap Manny and Dixie. 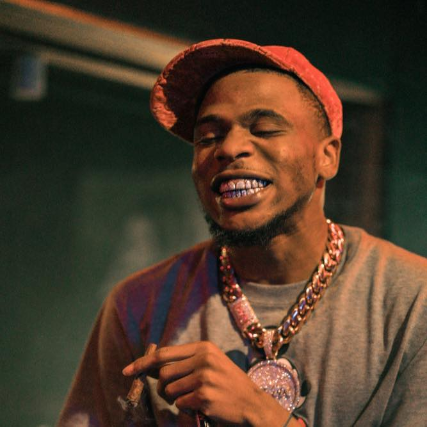 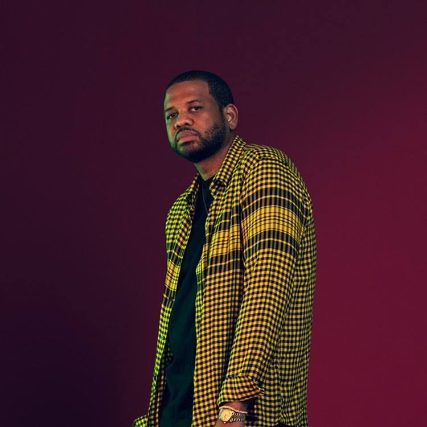 Five Venoms is a Miami Based DJ, he has played at the biggest clubs and festivals in Florida. Being one of the top DJs in the new wave of hiphop music, he has graced the stage with artist such as Lil Uzi Vert, A$AP Ferg, XXXtentacion, and Big Sean, just to name few. His eclectic scratch style and music selection has moved crowds around the World. Five Venoms has worked with companies such as Macy’s, Patron and Mercedes Benz. He is the Official DJ for Rolling Loud, the biggest hiphop festival in the world. No matter if it is a hip hop show, Open Format, Top 40, or a Throwback 80’s party, Five Venoms is rocking the crowd.